La Paz is a Latin American metropolis, in Bolivian sauce. Nestled between towering Andean peaks, the city is struggling on steep slopes which are memorable for a capital city (the highest in the world with 3,650 meters above sea level), but with the extremes of 4100 meters in El Alto and of 3,000 meters in the suburbs of La Paz. The city center is surrounded by the Cathedral and the Government Palace, or Palacio Quemado, named after the number of times it was burned by the flames. Meeting point for travelers from all over Latin America, La Paz concentrates too many social contrasts: colorful markets give way to modern quarters and then again neglected streets where barter is still practiced and you can live, sleep and eat with little money.

A plane takes off, blinking stars, never so many, never so close, night passengers of rickety buses without a destination. A cable car that combines both worlds. La Paz. 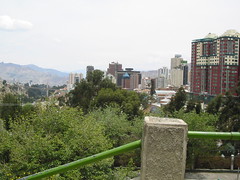