Porto Alegre is a pretty and peaceful town. Around a lot of green and boundless land of the gauchos, prelude of Argentinean pampa, where the local cowboys live their herding and hard life, sipping mate and waging a tough challenge with life.
The ring is almost closed, lacking only a final touch, a final check and then off to a new world … In this corner of Switzerland everything takes on the contradictory contours of allegory: sympathetic northerners who fled from hunger past centuries have colonized a world so different from them, but they were able to shape it as they wished. To their own image: order, cleanliness, progress. All seasoned with a hint of green and gold fantasy. Até logo Brasil, muito obrigado!

Florianopolis, or Floripa for friends, is a true paradise, perhaps so perfect as to arouse some questions. I write on a rock by the side of a quiet and crystal clear ocean, almost sleepy, in front of my eyes a cream-colored beach, lots of green and some nice islets. Simply idyllic.
Too bad that I cannot take pictures, this will only be part of my memories and my stories.
Last night I attended the carnival in the city of Florianopolis, a wild mixture of all imaginable kinds of music and dances from samba carioca to maracatù pernambucano. It is not clear if the mix is really spontaneous or the classic tourist trick served to the many Argentines who spend their holidays here.
This is also why I feel more and more intense and inviting air of Argentina. Party tonight and then Porto Alegre, land of gauchos.

Curitiba is thousands of kilometers from north-east of Brazil and the difference is abysmal as the distance. From the cool climate to the looks of the people, from landscapes to house architecture. Everything reminds a little corner of Germany here in Curitiba. Lacking only the snow because everything else is already there.
Curitiba is not as cozy as the metropolis of the north-east, for example Salvador de Bahia, but has been recognized among the cities that stand out for their environmentally sustainable urban development. The city’s architecture is very modern and cosmopolitan, green parks and oases appear at every turn. The city buzzes with college students and it seems really alive.

Back to Salvador de Bahia. What a thrill to meet it again, so sensual, shiny, black… more beautiful than the first time and we also have the good fortune to meet again some friends for one last moqueca with macaxeira and feijoada together.
Back to São Paulo. What impression to meet it again: relentless, ever-changing, cosmopolitan… in a breathless mix of looks, cultures, religions, a strong heart that never stops beating.
A few hours and we can already feel the electrifying air of a fiery sunset, those that penetrate the soul and blind thoughts, already walking toward the sweet rest of the starry night, feebly illuminated by a honey-colored moon… 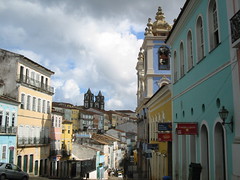 Back to João Pessoa, the land that one day belonged to Potiguara natives and now is the crossroads of the north-east, the easternmost point of the American continent, green, young, shaken by the rhythms of the frevo and axé.
By now we are all friends and we race to the bloco virgens de tambaú, another street carnival theme of this endless journey in Brazil. The party seems unstoppable and people move to the beaches of Jacumã.
The sky begins to be tinged with unexpected dawn when greeting friends and I feel exhausted when waiting for the bus that takes me back to Salvador de Bahia: to João Pessoa goes a full thought of smiles and even some tears, a saudade… 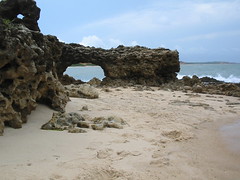 Also in Olinda the carnival has started and is already a whole turmoil for the final preparation of banners, disguises, choreographs; then all of Brazil will begin to dance and to enjoy chasing floats and electric trio.
Olinda is a really pretty town, which is affected by the proximity of the immense Recife, but maintains its mild and colorful rhythms. Every evening we climb up to the neighborhoods on the hill to eat macaxeira or mandioca com queijo (cassava with cheese) in the company of our friends. Between day and night we throw in the chaos of the carnival with music and dancing, we organize our itinerant banquet and dispense our street friends with sangria and joy. 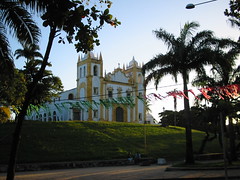 I went every day to the market, only to flood myself of colors, to get drunk of flavors, to live thousands of lives. So it happens in Jacumã, the unexpected pearl of the brazilian north-east (nordeste): enchanting beaches, almost deserted, nice and quiet people, art and colors, the welcoming pousada where I am located and that emanates an intense and positive energy. Magics of Brazil. 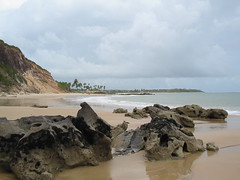 Micaroa, the carnival out of era in João Pessoa, a fun dive into an unknown dimension, sensual, forbidden, a game of madness, one pawing of restless souls. An infusion of music by electrifying colors, chiclete com banana and ivete sangalo, Caribbean, Latin American, Brazilian, black, white, red, yellow and green, African, Amazonian; continuous visions of savory dishes, peppery, spicy. The transgression of wild dances, slender bodies, liters and liters of whipped cream and smiles, a Bacchae carousel.
Friends, many friends, jokes and laughter, a cart to transport sangria, caipirinhas and cachaça, fancy dresses organized in haste, jesus, macarena and many more… it is the morning of the third day and the memories are gathering confused, modern knight citizens roam the deserted streets, the festival gives into silence, and the party is now over. 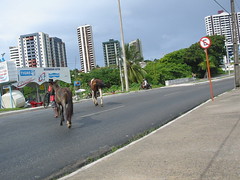 The praia da pipa is one of the most touristic beaches in brazil, but just beyond the bay we discover the paradise: the praia do amor, kingdom of the surfers, coconut trees, white sand and high waves. Continuing along the water line, an endless series of unnamed bays but with unique charm, fiery red cliffs and ferrous rocks, a lunar or even martian landscape…
The brazilian coast insists towards the south to the easternmost point of the americas in João Pessoa, an “extremely poetic” city like the travel poster says. Every year the micaroa takes place, the carnival out of era in João Pessoa. 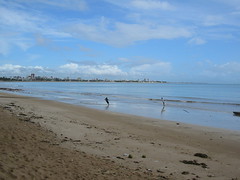 How does it feed itself this engine that makes us run? A fire that corrodes the soul, forcing to run, simply to travel… discovery, friendship, joy and pain. The trip means learning to savor every moment, every sunset, every word. The joy of a thousand guitars, the tears of a thousand violins. All the languages of the world enclosed in a smile…
Natal has a heart, you see it in the smiles of the people. The breakfasts at the lua cheia are a show of friendship, young people around the world who sit in peace at the same big table, laughing, joking, learning to love each other. Who knows how many years it will take to learn to ride a wave? Meanwhile it’s raining, and with the rain beach parties are even more lively. 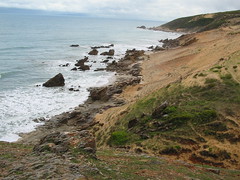