After spending a long period in the andean altitude, going down back to the amazon basin is an emotion, not matter if the climate becomes extremely hot and humid. Santa Cruz de la Sierra is located in the middle of the internal Bolivian trades, but also to and from other neighboring Latin American countries (Brazil, Paraguay, Argentina). No surprise that Santa Cruz, without being a city with intense history, is now the economic capital of Bolivia and the final goal of intense internal migration, driven by the search for work. Santa Cruz is already a frontier town in the east direction, because the Brazilian giant is closed and because it shares a strip of land with Paraguay called the Chaco: a sort of Latin American savannah, a sparsely populated and semi-arid area, turning into the Pantanal at the border, thanks to the influx of water from the Paraguay River and tributaries.
This territory is crossed by the oriental express train, a steel serpent that daily connects Santa Cruz to Quijarro, Bolivia’s last piece of land before Brazil. 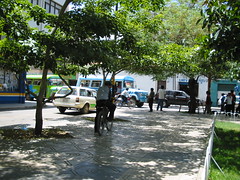