We listen for hours to the music that comes from the depths of the jungle: all this cosmos of lush greenery, mysterious animals and craftsmen of nature breathe in unison, incessantly. At the edge of this fabulous world lies Villa Tunari. Crossing point between the Andes and the Amazon Basin, between the brown and the green world. It does not surprise that in the pan-amazonian culture the green takes so many nuances, that is identified with different words in the indigenous languages. Over the Chapare river, where the chaotic progress launched its challenge to nature, there is still not a clear winner, but losing such a wealth of energy, culture and harmony would be an unforgivable crime.

And Cochabamba is watching us in disbelief, in its eternal spring above the misty amazon, proud of its fights that made it an example in the world for having firmly established the right to water as a common good. 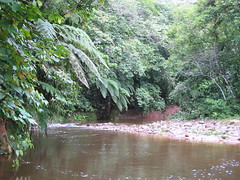